If your question is not addressed below, contact us through our feedback form and we will get back to you shortly.

Yearly plans are only for instances. All other resources including volumes, snapshots, images, and bandwidth usage (including any overages at the rate of $0.01/GB) are charged at the end of the monthly billing cycle. Any charges incurred for the yearly instance will not be refunded on deleting the instance or canceling the account.

Are there any monthly plans offered by IDrive Compute?

The monthly plans in IDrive Compute are postpaid. When you subscribe to a monthly plan, you will receive a bill at the beginning of every month based on the usage of the services and resources during the previous billing cycle.

How does Billing work in IDrive Compute?

IDrive Compute billing works on monthly postpaid and yearly prepaid basis. For monthly plans an invoice will be generated automatically in the beginning of the month for all the services and resources used by you along with the usage from the previous month. You will be charged automatically as per the selected payment method. For yearly instances, you will be charged at the time of creation and the instance will be renewed at the end of term.

Refer to the following for more information about charges: 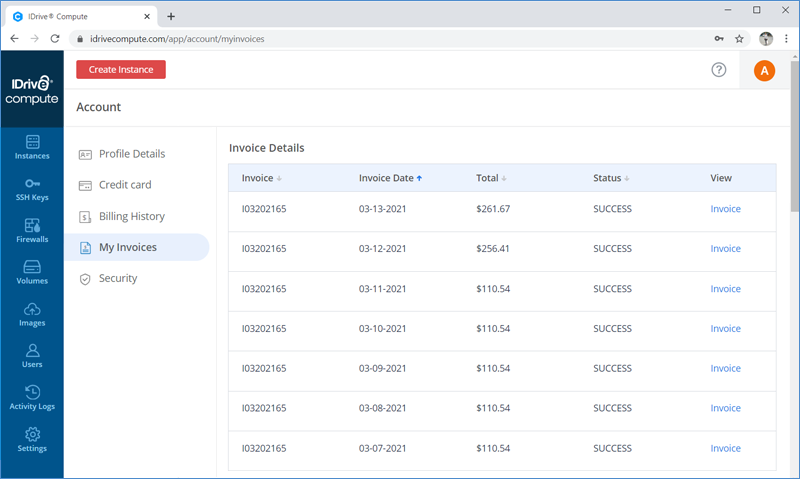 How do I view the billing details for my account?

To view the billing details,

In the billing history section, you can view the following information: 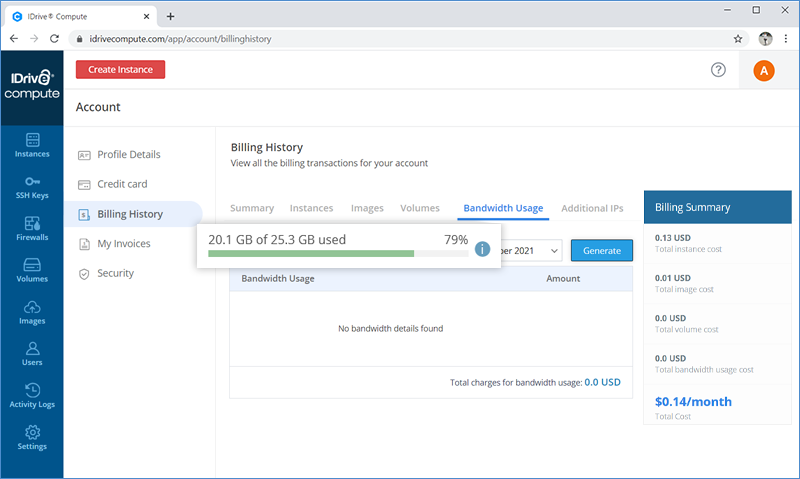 Are there any additional charges for instances? 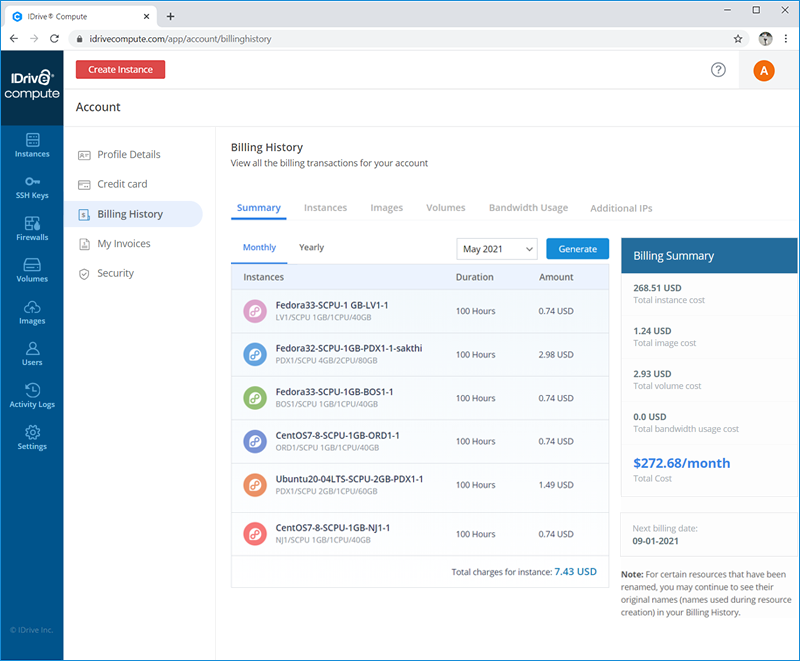 Are there any minimum charges for using resources?

If the applicable usage charge for any resource (instance, image < backup, snapshot & custom image >, volume) is less than $0.01, than a minimum charge of $0.01 will accrue.

What if I use an instance or resource for less than a month, would I still be charged for the whole month?

All resources (instance, image < backup, snapshot & custom image >, volume) in IDrive Compute are billed with a cap of 672 hours (28 days * 24 hours) in case of hourly billing. This ensures you are never billed more than the monthly cost of your resources.

In case you use the resource for less than 672 hours during a month, you will be billed by the number of hours.

In case the usage of a resource exceeds 672 hours during a month, you will be billed the monthly cost of the resource.

Why is my instance bandwidth network transfer limit is less than what is shown in the plan?

The network bandwidth quota of your IDrive Compute account is prorated depending on the creation and deletion dates of your instance. If you have created an instance in the middle of the month, your plan will include a lower transfer amount than the limit that is listed on our website depending on the time that is remaining in the month.

For example:
Let's assume you have created an instance with 10 TB network bandwidth on the 15th of the month. In that case, the instance will include 5 TB network bandwidth (half of the original quota listed for the plan selected while creating your instance). At the beginning of the next month, the transfer quota will be reset and the full transfer amount will be displayed at that time.

If an instance is removed before the end of the month, then the transfer quota that it contributes to your pool is also reduced based on the date of deletion.

I have used an instance for less than a month. How would I be charged for the bandwidth usage?

The transfer allowance for an instance is calculated on the monthly instance usage. For each hour the instance exists during the month, irrespective of being powered on or off, 1 unit from the total available allowance is accrued to the instance.

So if the network usage is for example 20 GB, it may attract an overage fee for the additional 5 GB network bandwidth consumed.

I created an instance and deleted it immediately. Will I get a refund?

No refund of the plan price will be admissible for Yearly Plans. However, if you have subscribed for Monthly Plans you will be billed at the minimum applicable usage charge of $0.01 at the end of the billing cycle.

I have created an IDrive Compute instance at 50% discount. Will I be eligible for the offer during the renewal of the plan?

The pricing discount for your IDrive Compute instance is valid only for the first year of subscription. For subsequent years, the standard billing cost of the selected plan will be applicable.

How does overages work?

In case you have used the full available bandwidth in your network transfer pool, you will be charged $0.01 for each additional GB consumed at the end of your billing cycle.

Is there any limit to the number of instances which can be created?

You can create up to 25 instances in a particular region, from an account. Contact Support if you have additional requirements.

How many SSH key pairs can be added in an account?

You can add up to 100 SSH key pairs in an account, in each region.

Is there any limit to the number of firewalls that can be created?

You can create up to 10 firewalls and 100 rules in a particular region, from an account.

Is there any limit on the number of volumes that can be created?

There is no limit to the number of volumes that can be created and Each volume can range anywhere from 1 GB to 1 TB in size. However, users can create volumes up to 8 TB for a particular region in an account. Contact support if you have additional requirements.

I have used an instance for less than a month. How would I be charged for the bandwidth usage?

The transfer allowance for an instance is calculated on the monthly instance usage. For each hour the instance exists during the month, irrespective of being powered on or off, 1 unit from the total available allowance is accrued to the instance.

So if the network usage is for example 20 GB, it may attract an overage fee for the additional 5 GB network bandwidth consumed.

Does IDrive® Compute use binary or decimal conversion?

In IDrive® Compute all calculations are based on decimal conversions. So 1 TB storage space is equivalent to 1000 GB and not 1024 GB.

I renamed my resource. However, I still continue to see the older name of the resource in the Billing History. Why?

The billing history for renamed resources will continue to be generated under the original name used during resource creation.

E.g. If you have created an instance named Instance A, and over the course of time have changed its name to Instance B, the charges for the instance will continue to be listed as Instance A.

Can I upgrade my plan for a prepaid instance?

Yes, you can upgrade your plan by resizing the instance to a higher prepaid plan. Refer to this FAQ to know about the charges.

How will I be charged if I upgrade to a higher plan of a prepaid instance?

The charge is prorated depending on the creation dates of your instance.

For example:
Let's assume you have created an instance at $30/year and after 6 months of usage decided to upgrade it to a higher plan of $60/year. In that case, the usage charge for the instance will be $15 ($30/2) and the remaining $15 will be utilized for the upgrade. The upgrade will accrue $30 ($60/2) for the remaining 6 months of your billing cycle and you will be billed $15 post deduction of the pending amount.

Can I use a prepaid card for payment?

No, prepaid cards are not accepted as a form of payment. You can use any other credit card that is not prepaid and is issued in the US, UK, and Canada, for making payments.

What is the fair use policy of IDrive Compute?

As per the fair use policy, to verify sufficient funds are available for monthly postpaid instances, we may run a prorated charge on your primary payment method registered with the account. The charges will be less than or equal to your outstanding balance and will be deducted from the final bill at the end of the month.

We consider the use of our IDrive Compute Service as Fair when a regular usage pattern is followed throughout an entire billing period. If our Service is not fairly used, action may be taken to reduce negative impact on our Service, including but not limited to rate-limiting the data you may send and/or receive and suspending or terminating the Service.

What happens after I cancel my IDrive Compute account?

On cancelling your IDrive Compute account, you will no longer be able to sign in to the account. All the resources (instances, images, volumes, backups, etc.) and users along with their existing data will be permanently deleted. The user must clear all dues.

Note: This operation is irreversible.